Design a site like this with WordPress.com
Get started

A liberal ideologue posted on a dirty old man’s blog (never let anyone tell you that Texas is a Good place) and I wanted to reply freely where I am not (yet) censored.

I reply, but endless moderation queues abound.  We then get this gem. 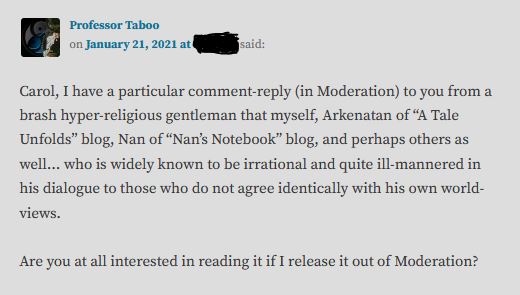 In the interest of not dealing with a known coward’s whims, I will reply here:

Faith is founding oneself in God & is the highest thought that allows all other thought to exist at all. Reason, broadest thought, pure intellect, is totally blind without Faith to light it up.

I am not only the only one here with capability to Reason, I am an experienced swordsman with it. you just can’t stop yourself from projecting, can you?

Venerable Fulton Sheen in “The Life Of Christ” (a wonderful book, but it doesn’t have nude pictures or jungian pedophilia like playboy does so you would be out of your element) said this:
“Conscience, Christ, and the gift of faith make evil men uneasy in their sin. They feel that if they could drive Christ from the earth, they would be free from “moral inhibitions.” They forget that it is their own nature and conscience which makes them feel that way. Being unable to drive God from the heavens, they would drive his ambassadors from the earth. In a lesser sphere, that is why many men sneer at virtue–because it makes vice uncomfortable.”

The police did let their own actors in, they were waving them in and even leading them like a school tour.

The now much more widely-known as antifa / blm rioters were attacking the capitol police before Trump’s speech was even over. The same Trump speech that was at a location a half-hour to 45 minutes (or even more with traffic) walk away from the Capital.

top antifa accounts were just taken down on twitter, just as it was no longer able to be hidden who the real perpetrators of this riechstag fire were (that pesky social media we didn’t have in 1932-1933, eh?).

When the Trump supporters did get to the capitol they were beaten and shot in the face with rubber bullets, some even were killed. All for the crime of not being state-sponsored terror like antifa / blm.

The whole thing reeked of a “third-world” dictator installation that the cia has been doing since the 1940’s, just this time on American soil and so the left finally approves (eh?).

But still, with ALL your hatred of Trump, it is TOTALLY misplaced. the devil’s century began in 1917 and was going to end in 2017 no matter what. Trump did not take away your “ye will be like gods” delusion, that was never (NEVER) going to happen. PERIOD.